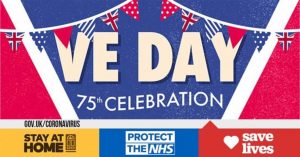 The 8th May 1945 was the day peace emerged after nearly six years of war, so the 75th anniversary on 8th May 2020 represents an important milestone in our history.

Decorations
In advance of the 8th, if you can, we encourage you to decorate your windows and homes in red, white and blue to mark this significant date.

12 – 4pm Set up the deckchairs and picnic in your front garden.  Check out English Heritage’s VE Day at Home Pack for some tasty ideas.

2.45pm BBC One will broadcast Sir Winston Churchill’s famous victory speech in which he addressed the nation to announce the end of the war in Europe.

3pm – To coincide with the time Winston Churchill officially announced the end of WW2 in Europe from the Cabinet Office at 10 Downing Street, London raise a glass of your favourite refreshment in The Nation’s Toast to the Heroes of WW2

9pm -Address by Her Majesty The Queen, followed by a UK-wide rendition of Dame Vera Lynn’s ‘We’ll Meet Again’ to mark the 75th anniversary of VE Day.